use contact page to request from Nyilasi Fine Art in 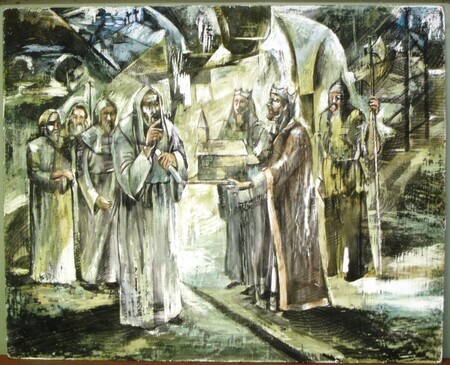 Click on the image to enlarge
$1,000.00
Canadian Dollars
Inquire about this work

Description: The ancient city of Esztergom was Hungary’s first capital. Blessed Eusebius (in Hungarian, Boldog Ozseb) (1200 – 1270) was educated as a priest in Esztergom but decided to become a hermit in the nearby Pilis Mountains. After receiving a vision, he assembled all the religious hermits living in the forested mountains and founded a monastery. This lead to the foundation of similar communities.

Nyilasi had a particular interest in Eusebius because his own summer cottage in the Pilis Mountains was located near the site of the monastery.

In this mural plan, a king and queen meet with Eusebius and three of his fellow hermits. They humbly award him the funds to build a monastery, symbolized by the building which the King proffers. Eusebius raises his right hand, blessing his generosity.

Details in the painting include:

Upper left: Caves if the hermits; Christian crosses on hilltops.

Right side: The King’s castle, with a long staircase descending to their place of meeting. The King and Queen have humbly come down to meet Eusebius, rather than expecting him to attend an audience within the security of their fortress.

Middle, placed diagonally: A strip of pavement bisects the two groups, symbolically indicating the separation of secular and religious ways of life.